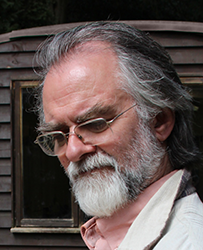 I can only write in any detail about the time I worked with Pete Jacobsen in those early days, but there are other tributes, reminiscences and obituaries available. Here are a few:

My connection with Pete goes back to 1974 and my band Perfect Stranger, for whom I wrote Life and Times. I told the drummer Dave Barry I was looking for a good keyboard player, and he sent me to a pub called the Ship York in Surrey Docks, at that time the most godforsaken, end-of-the-world place you could imagine, where Pete had a residency with a trio. This utterly astounding blind pianist was playing with (as far as I recall) a hopeless bass player and a moderate drummer, and clearly carrying the whole thing. As a party piece he did La Bamba, with a fairly highly evolved version of the riff in his left hand and shaking a tambourine in time with his right! We talked, I told him about what I was doing and he seemed very keen, so he was in.

Pete was very taken with the rhythmic and formal challenges of my music: no repeated choruses, different time signatures in almost every bar and keys all over the place. (As a huge admirer of Frank Zappa’s music, I recall playing Zomby Woof from the Overnite Sensation album to Pete, with its quintuplets and 5/8 bars, and he was blown away.) I wrote out the dots for all the other players, who’d never seen anything like it, and asked Pete what I should do for him. ‘Make me a tape,’ he said, so for a 12 minute piece he got a tape about an hour long consisting of me saying, ‘the next bar’s in 3/4 with two beats of Cm9 and a beat of Fm7; the next bar’s in 5/8...’ and so on, and playing slowly the occasional passage where I wanted him to play something specific — deadly stuff! However, within a couple of days he’d not only memorised all this, he’d turned it into real music, and this without having any idea what the other parts would be doing.

What’s more, within two or three rehearsals he knew everyone else’s parts better than they did: I would stop the music and be processing what I’d just heard to analyse what went wrong, when Pete would beat me to it and say ‘[insert name] played a C sharp instead of a C natural’ or whatever. Astonishing! And to cap it all, when we met for our very first rehearsal, in the back room of a pub in Islington, although the piano provided was reasonably in tune with itself it was, fortunately fairly accurately, a semitone flat... and Pete transposed the whole piece on the spot! I couldn’t believe who I had the privilege to be working with. As well as having the most acute musical ear I have ever encountered, and phenomenal powers of memory, he was at the same time a genuinely sensitive and inventive musician — with, for good measure, a terrific technique.

Pete was determinedly independent, coming into London on the train from his home in Southend on his own, carting a keyboard and an amplifier. On one occasion he arrived looking somewhat dishevelled, and when asked what had happened he told us he’d fallen off the edge of the station platform, but he was completely unfazed by this and got straight to work rehearsing. He was also independent in his views about music. I once asked him if he liked Bartók’s string quartets, which particularly interested me at the time (and still do), and he said no. When I asked why, he said, ‘Because they sound like piddle.’ There’s really no arguing with that, so we never agreed about the Bartók quartets.

After Perfect Stranger came to its inevitable end I saw Pete at gigs occasionally over the years — among other things, he played in Morrissey Mullen for a while. I would go up to him at the bar and say the magic words, ‘three and three quarters four,’ and he knew exactly who he was talking to. He never achieved major recognition — certainly not what he deserved — but he was universally admired by the musicians he worked with. He was the one they all wanted to have in their bands, whatever the genre. Life and Times is now dedicated to his memory.