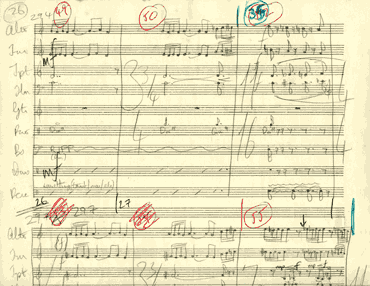 Life & Times (of a Perfect Stranger)

This was written for the band I intended to call — and have now definitively called — Perfect Stranger, which you can read about in detail here (and it predates Billy Cobham’s album Life & Times by two years, so no, I didn’t nick it and it isn’t a deliberate tribute).

The work has four movements, of which the original band only got as far as rehearsing the first, Formative Years, 12 minutes long. I deliberately set out to follow textbook classical sonata form for this, but with a series of improvised solos where the development section would otherwise be. I had recently read about Bartók basing the proportions of his music on the golden section, so I took this to an extreme, and there are, with regard to time, golden sections within golden sections within golden sections. At the same time I tried not to make all this glaringly apparent and produce what I hoped was an exciting piece of music. It was also an extremely complex piece of music, especially for jazzers who are used to playing in 4/4 (or 3/4, or occasionally 5/4) throughout, with repeated choruses consisting of 8-bar phrases. Not only did my piece have no such repetition, being through-composed, it also had frequently changing time signatures (every bar in large chunks of it), including 7¾/4 (you can see 3¾/4 in the snapshot of my scruffy pencil score above, before I reorganised the barring). As a result, the players’ eyes came out on stalks the first time they saw their parts, but we did manage to pull something together in the end. Despite (or possibly because of) being blind, the one who learned it all by far the fastest was Pete Jacobsen, to whose memory the first movement is retrospectively dedicated.

Sadly, it all proved too impractical to continue. No-one was being paid for any of this, and it was unreasonable to expect jobbing musicians to turn up to a rehearsal if there was paid work elsewhere. As far as I recall, we only had all nine members together on four occasions, but we did enough work in smaller groups for the band members to get some idea of the music. Eventually, I decided to call it a day, but we managed to get everyone together for one last rehearsal, where we made the recording of Formative Years you can read about and hear below (the only complete recorded performance by humans on this site).

The other three movements, which we never got round to working on seriously, are less tightly structured than the first, with more extended solos for the excellent musicians I had at my disposal — such a shame we never heard them … but that’s all changed! In fact I — and others — have now heard all the other three movements, along with some other pieces, played by humans, and it’s sounding amazing! (Of those other pieces, some were written for the original band and some are more recent arrangements. Oh, and there are a couple of tiny Zappa pieces too.) The titles of these movements are not necessarily final:

I made my own MIDI recording of all four movements for demo and learning purposes (but not for public consumption here) — half an hour of music altogether — along with a new score in Finale, from which you’re invited to download an extract here, though I’ve kept the snapshot above of my original pencil mess, which you also see in the YouTube video below. And no, I’ve no idea now what the coloured numbers mean! (And I’ve since added blue ones...)

This is the identical recording twice, the choice being offered in case of technical hiccups on either of the ‘mother ships’. Note: these two players will run simultaneously, so unless you fancy a double dose (out of sync) of my ‘spiritual output’, I recommend that you take care to avoid this happening!

...with a sneak preview of the score