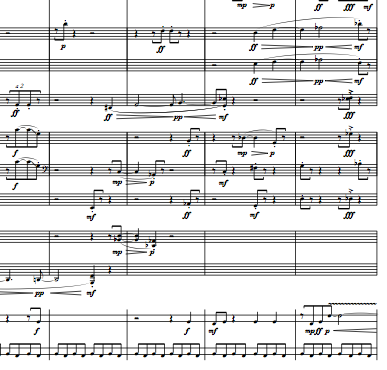 In 1993, the Grimethorpe Collery Band gave a concert titled The Band Plays On in the Queen Elizabeth Hall on London’s South Bank, as a part benefit, part celebration of the fact that the band was continuing to play in spite of the colliery having been closed. Elgar Howarth invited four composers, one of whom was me, to write very short pieces — 30 seconds, in fact — to be interspersed through the concert and played without a conductor. With this in mind, I placed material generated by my Fractal Music program over a simple motor rhythm in the percussion. In the event, however, Howarth did conduct these pieces, and mine was the only one to keep to the 30-seconds brief (I swear one of them, by a composer I won’t name, was a full four minutes long)!

The title reflects the fact that the miners at Grimethorpe and elsewhere were short-changed by the government, it’s a short piece and, well, it’s a bit of a change too.

This a computer-generated mockup of music entirely or partially for ‘real’ instruments. Clearly it is no substitute for a live performance, but it’s all I’ve got — or perhaps all I can make public for various reasons. There’s a fuller disclaimer on the Listen page.